Learn about Buddhism at the Buddha Tooth Relic Temple, Singapore 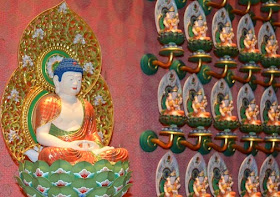 It’s a strange name I grant you, but Singapore’s Buddha Tooth Relic Temple while on one hand being exactly what it says on the tin (a temple that houses a tooth relic believed to belong to Buddha himself), is also a fascinating museum. Whether you already have an interest in Buddhism or feel like you know nothing about it, the Buddha Tooth Relic Temple is both an educational experience and an impressive work of art.


Religion is a controversial topic anywhere you go. Having grown up surrounded by Christian norms and traditions, Christianity is the religion with which I am most familiar. However, the little I knew about the principles of Buddhism always made Buddhism appeal to me. Keen to know more I made sure I visited the Buddha Tooth Relic Temple when I was in Singapore.

Built in the early 2000s and opened in 2005, the Buddha Tooth Relic Temple, on the outskirts of Singapore’s Chinatown, is more than just a temple; it also houses two museums. The building is built in the style of the Tang period and is both a place of remarkable peace and tranquillity, and somewhere dedicated to encouraging a deeper understanding of Buddhism. The architecture follows a traditional Buddhist mandala design and the decoration inside features rich colours and many, many vibrant depictions of Buddha.

Universal Wisdom Hall
Entering through the Mountain Gate on the ground floor takes you to the main chamber of the Buddha Tooth Relic Temple, the Universal Wisdom Hall. The hall is presided over by an intricate and much-revered carving of Bodhisattva Cintamanicakra Avalokitesvara, seated on a lotus and guarded by phoenixes. His six arms represent compassion, satisfaction, reliability, purity, the prevention of suffering and the presence of the supreme Dharma. He is considered to embody the compassion of Buddhists and is revered as the protector of the world.

The walls of the richly decorated and impressive Universal Wisdom Hall are lined with 100 Buddhas, each with different mudras (hand gestures) and accessories symbolising their virtues and powers. In stark contrast to the serenity of the 100 Buddhas, there are 100 dancing dragons celebrating the Buddhas. Dragons are an important symbol in Chinese culture, representing power and strength. They are believed to guard the gods and control the elements.

The Universal Wisdom Hall is a huge hall, and is often a hive of activity. Monks and other devotees recite mantras and chants, and members of the public can make offerings. Visitors can walk the length of the hall while Buddhist ceremonies take place. It is absolutely entrancing to watch and to see the focus of devotees as they recite mantras.


Eminent Sanghas Museum
The atmospheric mezzanine above the Universal Wisdom Hall is home to the Eminent Sanghas Museum. Up here you can hear the mantras being chanted in the hall below, which is very fitting as a mark of respect to the monks featured in the display. The walls of the mezzanine are lined with photographs and the life stories of much-respected monks whose devotions have led them to contribute significantly to the community. It also shows the journey Buddhism took to arrive in Singapore with an interesting map indicating that Buddhists came from India, Tibet, Sri Lanka, Thailand, Myanmar, Malaysia and China.

Buddhist Culture Museum
The Buddhist Culture Museum occupies most of the third floor and displays countless Buddhist artefacts and statues. The displays are excellent and give clear explanations of the meaning and significance of the objects they describe. Within the museum is the misleadingly named Sacred Relics Chamber. Contrary to expectations, the Buddha tooth relic is not inside, but the chamber is home to the Avatamsaka Trilogy, Buddha Sakyamuni in the centre, Bodhisattva Manjusri seated on a black lion and Bodhisattva Samantabhadra, seated on a white elephant. Together they represent wisdom, virtue, joy and the practices of Buddhism.

Sacred Light Hall
So where is the tooth relic? Since it is considered holy it would be inappropriate for it merely to be housed within the museum. The Buddha tooth relic is inside the inner chamber of the Sacred Light Hall on the fourth floor. If you don't trip over the shoes at the threshold you can enter this working temple. It is beautifully lit by lanterns suspended from the ceiling and, being a working temple, you are likely to see devotees in prayer and meditation.

Rooftop Garden
Even the roof of the building is devoted to Buddha. As you leave the stairwell you emerge onto a covered walkway around the parameter of the building that is lined with thousands of tiny Buddhas. A prayer wheel stands in the centre of a rooftop garden that provides a beautiful spot for a moment of quiet contemplation.

The Buddha Tooth Relic Temple offers a unique experience, combining a religious building with an interesting and educational museum. Even as you travel between floors you can admire the ornate silk-lined elevators and the historic photographs on the staircases. Vegetarian meals are available to monks and others in the basement for a donation. The temple also has a shop offering books about Buddhism, mantra CDs and prayer accessories, as well as a small number of souvenirs. Buddha Tooth Relic Temple is a fascinating place to visit, regardless of your knowledge of Buddhism.

While tourists and other visitors are welcomed at the Buddha Tooth Relic Temple, it should be remembered that it is a building of worship that houses items considered sacred by devotees. Visitors are asked to conduct themselves quietly and respectfully, to wear clothes that cover their arms and knees, and remove their shoes if they enter the Sacred Hall of Light on the third floor.